The Watertown was settled in 1800 by pioneers, such as Hart Massey, Henry Coffeen, and Zachariah Butterfield, from New England after the Revolutionary War, and began a 200-year legacy that continues today.  These pioneers chose this area with the foresight of creating an industrial center, which would draw its power from the mighty Black River.  The Black River’s elevation dropped 40 feet in the center of town and 120 feet over 2.5 miles which produced incredible waterpower. The naming of Watertown was after the many waterfalls throughout the river.

Public Square, originally called the Mall, was created when Hart and Isaiah Massey, Henry Coffeen, Zachariah Butterfield, Jonathan Cowan, Jesse Doolittle, Aaron Keyes and Medad Canfield deeded the land for public use in 1805.  Such public areas were common in New England towns and villages at the time and was a typical location of the center of the business district.                  Old Views of Public Square

The western end of the present Public Square was twelve or fifteen feet higher than the eastern end while the center was a depression that has been described as being large enough for a comfortable skating rink. There was a stream of water having its source south of Clinton Street and running across Stone Street in front of the Arcade, crossing the western end of the Square on its way to the river. Yet, out of this unsightly spot within a few years evolved one of the most beautiful public squares to be found in any city of its time.

The round parks in the center of the square were laid out in 1853, which consisted of an oval with a fountain for watering cattle and horses and two outer circles at each end.  Because cattle roamed the square in the early days, the central isle was set off with fence posts and a link chain.  Around 1865, the first flagpole was placed in the large oval.  It was made from a single 122-foot tree from a local forest.   In 1894 the square was paved for the first time and in 1906 the fencing was removed.

The naming of Watertown as the county seat, also in 1805, led to much progress in the hamlet. Lawyers such as Egbert TenEyck, Amos Benedict, Micah Sterling and George Sherman set up practice here. Six hotels were constructed. The Failing Hotel, first known as the Traveler’s House, was built in 1808 at the corner of Main and LeRay Streets and during the War of 1812, soldiers used it as a barracks. Court Street became both a residential and business street. John Paddock and William Smith launched new stores. Other well-known names such as Norris Woodruff, Orville Hungerford and Jason Fairbanks also engaged in businesses.  Small mills and factories sprang up and businesses extended along Factory Street. 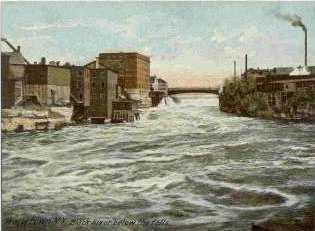 The development of waterpower was the force that started the wheels of progress for the community. Factory Village, which was annexed into the Village of Watertown in 1831 and later became known as Factory Square, had its real beginning when the Black River Cotton and Woolen Manufacturing Company was built in 1813. The mills and businesses depended on the mighty Black River for its power.

Watertown became an incorporated village in 1816 and continued to prosper. Businesses, industries and the population doubled by 1824. Growth continued with the decade between 1850 and 1860 seeing the largest amount of building construction. This was due in part to the rebuilding after a devastating fire in 1849, but also due to new building expansion.

By the mid-19th century, entrepreneurs had built paper mills and major industries.  H.H. Babcock’s Carriage, established in 1845, and Watertown Spring Wagon Co. were two of the many businesses that were helping Watertown to thrive.   The Davis Sewing Machine Co., which began in 1886, employed about 200 people. The Watertown Steam Engine Co. had assets estimated at $1,000,000.  Watertown became one of the nations’ principal paper manufacturing communities and can still boast that it has the oldest continuously running paper mill in the nation – Knowlton’s Specialty Papers. Frank W. Woolworth conceived the idea of the five and dime store while working in Watertown in 1878 and expanded the concept into a chain of stores .  In the late 1800's and early 1900's, it was common for businesses located in Public Square to display red, white and blue decorative garlands or buntings all along the building facades.  This led to Watertown being referred to as the “Garland City.”

In 1879, brothers John E. Kemp and Oscar P. Kemp left Watertown for travels out west and became two of the founders of Watertown, South Dakota.  Named after their hometown, it was established as a rail terminus when the Chicago & Northwestern Railroad reactivated part of a line it had constructed to Lake Kampeska, South Dakota

The next 100 years of history includes the story of further commercial and financial growth, as well as the military expansion of Pine Camp into Fort Drum.  Fort Drum, located in close proximity to the City, has transitioned from a small military training facility into a 107,000+ acre US Army Military Installation and the home of the 10th Mountain Division.  Over the years, the economic climate has affected business and industry. However, some of today’s businesses have their roots in our early history. Even though the City is much different from the hamlet of 1800, Watertownians take pride in the rich heritage that was left for us and for future generations.